Last week Cardi B released the promo video of her Whip Shots release on her IG page.

Whip Shots is a line of luxury vodka- infused whipped cream topping for drinks, food or a mouth opened wide. The shots are available in three different flavors: vanilla, caramel and mocha, containing about 10% of alcohol in each can. With the motto, “Bougie and Boozy” the appeal behind the alcoholic whipped cream is it’s versatility to be consumed on anything from a pie-la mode, or a stomach depending on your party level.

Cardi B doesn’t just leave us to our imagination with the whipped cream, but she offers suggested recipes that would pair great with the diary base liqueur. The company’s website has a recipe for a drink called Fire Island, with ingredients including vanilla vodka, passion fruit puree, lime juice, vanilla syrup, a hint of rosemary and of course the vanilla whip shot. 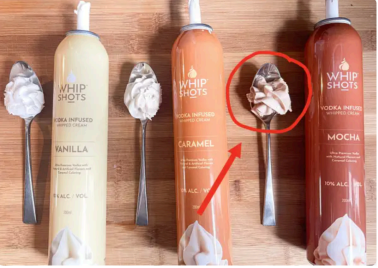 Whip Shots has been received well by some testers who have complimented the whipped cream for it’s fullness and sweet taste. I’m hoping I’ll be one of the 500 to get a taste of the whipped cream. I’ll be following up with a first-hand account of how good or bad the product is.